Tree Pruning improves the life and shape of trees

It is important to understand trees are made up of wood and wood is tissue made up of living, dying and dead cells in a highly ordered arrangement. This tissue consists of cellulose and lignin. The living cells in the tree store energy reserves for tree defences. This is why it’s so important that a tree surgeon does not over prune trees by topping, taking out too much living tissue. This badly affects the defence of trees.

Flush cuts destroys a tree's major defence system. Pruning cuts made by tree surgeons must avoid cutting into the branch bark ridge, and the branch collar. When correct pruning cuts are made a complete circle or ‘doughnut’ of callus is formed around the cut.

When tree surgeons cut into the collar, ie flush cutting, broken rings of callus form, like a horseshoe shape. Flush cuts are ‘bad practice’ because they remove the tree’s protective boundary that forms within the branch collar. Flush cuts lead to a reduction of energy reserves in the tissue around the wound. Large cankers often form about flush cuts. which can lead to excessive sprouting. Barrier zones are severed and layers of defenceless wood is exposed.

Any dormant buds will be stimulated upon exposure and will start sprouting shoots everywhere. This growth spurt will use up a substantial amount of energy reserves which are normally needed for tree defence. Proper pruning is the removal of living, dead and dying parts of trees to benefit the trees well being. Flush cuts expose the fresh wood to infections. 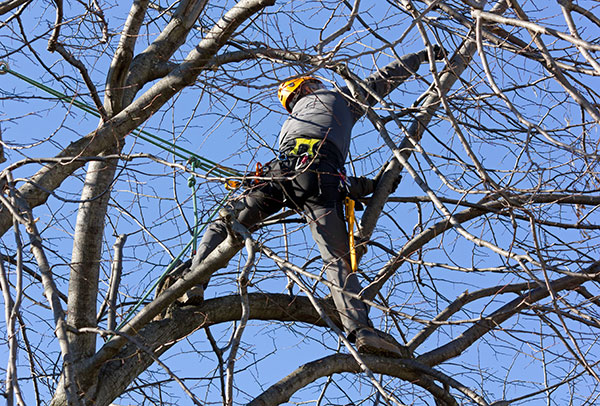 When to carry out formative pruning of trees

Pruning of deciduous trees (those that lose their leaves in winter) is often best carried out in winter, as it is easier to see the branch structure.

Pruning of evergreen trees is often carried out in April, as they come into growth.

Exceptions to these rules include tender deciduous trees, best pruned in spring, once the risk of frost has passed, and also stone fruit trees (cherries, flowering cherries, apricots, peaches, plums and nectarines). These can be pruned in winter while young, but are later best pruned in summer. They can be at risk of catching the diseases silver leaf and bacterial canker if large branches, those thicker than your wrist, are pruned in autumn or winter.

How to carry out formative pruning of trees

Most ornamental trees are trained in a central-leader standard, with a clear trunk and a head, or canopy, of branches.

Where trees grow with a clear central-leading branch that grows upwards ahead of the other branches, it is important not to cut this central leader, as this could spoil the final shape of the tree.

Then proceed as for a mature specimen, following the advice for the tree in question from a book such as: RHS Pruning & Training by Christopher Brickell and David Joyce, available to buy online from the RHS Book Shop.

Some trees, oaks for example, develop as central-leader standards while they are young, but then lose their leader naturally after a number of years, and develop as branched-head standards.

It is possible to reduce the final height of trees that would otherwise grow as central-leader standards by removing the leader and pruning as a branched-head standard.

It is advisable to check in a book first as to whether this technique is suitable for the tree in question, as some trees can be spoiled in shape by premature removal of the leader.

Years one to three

Follow the steps above as for a central-leader standard.

Where upright shoots threaten to compete with the leader of a central-leader standard tree, then a single leading shoot will have to be selected, and the others removed. Choose one that is upright and in line with rest of the tree.

Where the leader is broken by wind, snow or accidental damage, then cut it back to a strong side shoot that is growing fairly vertically. Attach a cane to this side shoot and tie the shoot in to the cane as it extends, training it upwards as a new leader.

A tree may need pruning for a variety of reasons:

Once the decision has been made to prune, your next decision is whether or not to tackle the job yourself. In the case of a large tree where you want to remove big branches in the upper area of the crown, it may be best to hire experts. Large tree pruning, in particular, can require climbing and heavy saws or even cherry-pickers and chain saws. This is a job that should be left to trained and experienced professionals. Never compromise personal safety in pruning a tree.

When a tree has outgrown its space in the garden, it will need to be reduced in size. It is better to do this sooner, rather than later, as the longer it is left, the harder it is to prune and less likely to recover.

Trees also might need to be pruned and therefore reduced in size if they have dead, diseased, crossing or torn branches.

It is usually best to try and keep tree (and shrub) growth under control with regular pruning, but this is not always practical, especially if you inherit overgrown trees and shrubs in a new garden.